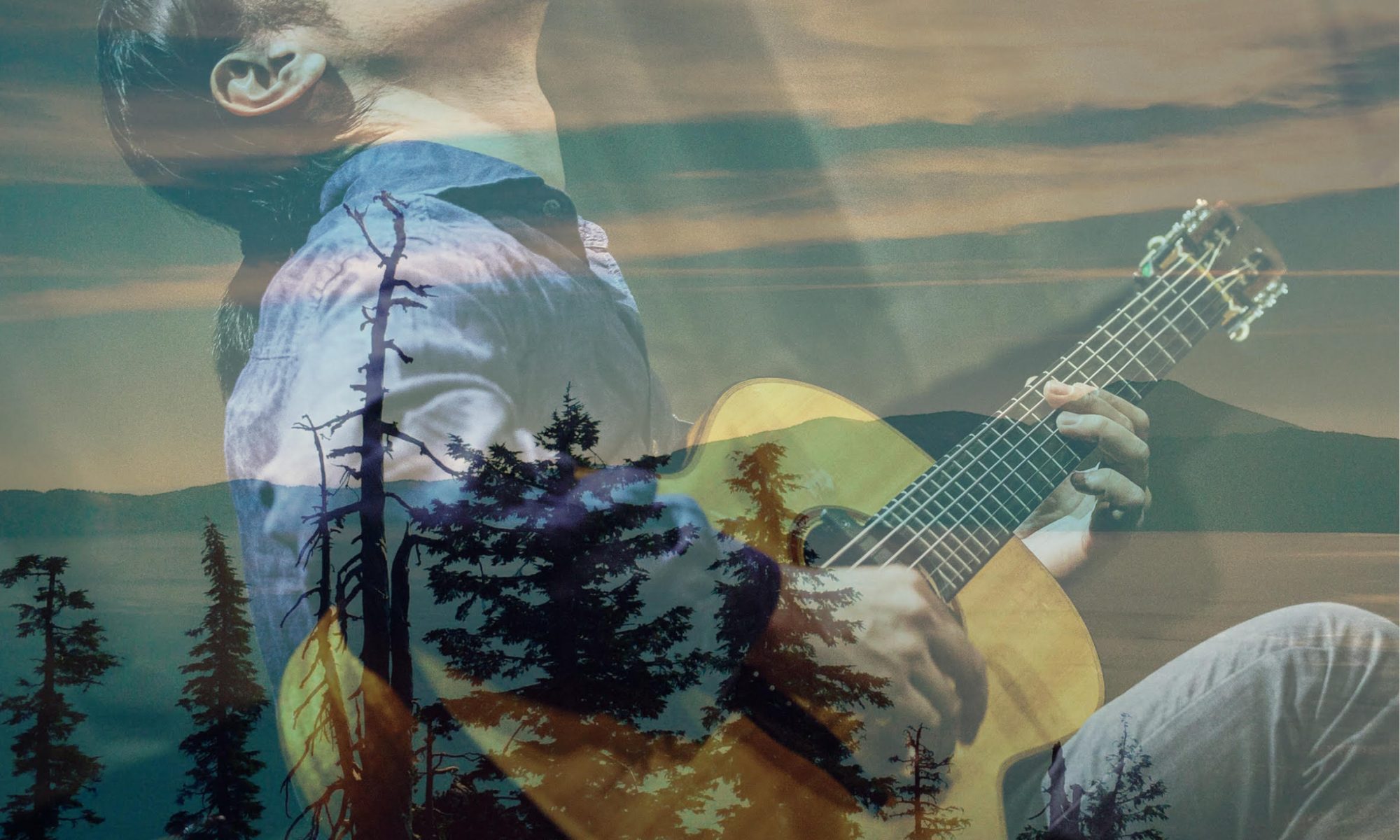 Mixed and Mastered by Jeb Enoch

“Since I released my last record “Places” in 2014, I have been going to town to town playing shows in many different places. And that became my lifestyle. I wanted to capture what I am doing. I was thinking alternative way to do it instead of regular studio recording process (booking a recording studio, write music and record which I did for my past records).

I came to know the engineer Jeb Enoch and he gave me an idea of doing live recording at his recording studio in Maine. I thought that is ideal as I can get good quality sound plus live vibe with audience. So I went up to Maine in the end of June and I recorded ten songs there. This is how this record came about and I think it is a unique album because it is sort of between studio and live album.”

Acoustic Guitar/ July / August 2020 issue (Kenny Berkowitz)
Brilliant fingerpicking on a Martin, plus looping pedals”
Hiroya Tsukamoto is a phenomenal talent, a Japanese fingerpicker, composer, and Berklee College almuni who was also second-place winner at the 2018 International Fingerstyle Guitar Championship. Now based in New York City, 18 years after leaving Kyoto, he’s on the road virtually every weekend, playing solo with just a Martin OM-42 and a set of looping pedals.
Window to the World catches Tsukamoto at one of those many performances, a 2019 live-in-the-studio gig in Brunswick, Maine. The Martin sounds crisp, the room feels warmly intimate, and the fingerpicking is delicate, fluid, and beautifully detailed. Two folk songs, the Okinawan “Asadoyayunta” and the Scottish “Water is Wide”, show the comforting breathiness of his voice and the outer edges of his guitar playing: staccato and lyrical, precise and passionate, solo and layered. The rest of the pieces are travelogues filled with sumptuous arpeggios and soaring improvisations, impressionist landscapes of canyons, coastlines, and mountains that recall the sweetest, gentlest memories of the places he’s been and the people he’s met.
In the longest song, the expansive 11-minute “Storytelling:, Tsukamoto shares an unexpected encounter with a Buddhist monk in the hills of Tennessee, singing his story in both Japanese and English to encompass the miles he’s covered since moving to the States. “I have been traveling along from the east to the west,” he sings in a mantra of journey and discovery, a quiet nod to the poet Basho. “I’ve been traveling along to find myself, to find my way”.
Mainly Piano (Review by Kathy Parsons)

Window to the World is the fourth solo album from Japanese-born guitarist and composer Hiroya Tsukamoto. I was fortunate to host a house concert that featured Hiroya in May 2019 and planned to host another one this year, but the COVID-19 pandemic forced Hiroya to cancel his tour. Born in Kyoto, Hiroya came to the US in 2000 after receiving a scholarship to Berklee College of Music. He formed the group, Interoceanico, with musicians from different continents and released three albums with them. Hiroya has performed in concerts all over the world, including several appearances at Blue Note in New York City and on Japanese National Television (NHK). In 2018, he won second place in the International Finger Style Guitar Championship.

One of the things I really enjoyed about Hiroya’s live performance was the mix of original music and music from Japan and other cultures. He played solo acoustic guitar, but by looping, was able to create more of an ensemble sound for some of the music. He looped his voice at times, too, and actually sang harmony with himself. For this album, Hiroya wanted to capture more of the feel of his live performances rather than doing a straight studio recording, so he did a live recording at Jeb Enoch’s Maine Music Mill recording studio in Brunswick, ME. The audience reaction can only be heard on the track “Storytelling,” which is a combination of Hiroya telling a couple of stories from the road and music. Hiroya also sings on several tracks – sometimes in Japanese and sometimes in English.

Window to the World begins with “Hobbomock,” a haunting song performed with a mix of solo guitar, occasional vocals, and effects using looping and the microphone – a great start! “Coastline Remembrance” is peaceful, finger style acoustic guitar at its best. “Gemini Bridge” is a great example of using a series of loops in a few passages to create the sound of multiple musicians. It’s really fun and fascinating to watch this technique being done live! “Black Canyon” is a favorite. At 9 1/2 minutes, it has plenty of time to unfold the many layers of its story. Sometimes melodic and lyrical and sometimes more ambient, it’s amazing to realize that all of it was performed with one guitar and one voice! I also really like “Northern Rain,” a slightly mysterious instrumental that describes many different kinds of rain, from a gentle shower to an intense downpour. As an Oregonian, I can relate to all of them! Hiroya again uses looping to get an incredibly complex sound in places! The closing track is a charming arrangement of “Water Is Wide,” a song that has been recorded by many different artists in the past fifteen years or so. Most of this arrangement is a gentle guitar solo and then Hiroya sings the tender lyrics to the first verse and brings the album to the end.